The game was over. The trophy was presented. It hit me. I just witnessed the greatest football player of all time overcome insurmountable odds on the biggest stage in American sports. After falling behind 28-3, Brady led the Patriots to score 31 straight points, including two 2 point conversions to beat the Falcons in a game that I still can’t believe happened.

After Sundays win, Brady now has 5 rings, 4 Super Bowl MVPs, and 7 Super bowl appearances. Many wanted to call Brady the LeBron of football, the clear best player in the game. I decided to take things one step further, as only I could do. On Facebook, I wrote that Michael Jordan is the Tom Brady of basketball. OF COURSE the natural hating, Jordan worshippers couldn’t accept such a statement. But they’re wrong, and I’m right. Michael Jordan is to basketball what Tom Brady is to football. They’re both, the greatest players in their respective sports. They’re both clutch. They both reserve their greatest performances for the biggest stages.

Brady has won five Super Bowls. Jordan won the NBA Finals six times. Brady lost twice. Jordan never lost. In football, one game can present the opportunity for a fluke, which explains the Giants win (thanks to miracle catch) in 2008. In football, the system isn’t designed for one team to dominate over a 14, 15 year span. Salary caps, contracts, cause great roster turnover from year to year. Basketball is more dynasty friendly. There has been one constant player in New England during the Bill Belichick era, and that’s Tom Brady. Brady’s 5 championships in 7 years, may be more impressive than Michael Jordan’s 6 for 6. 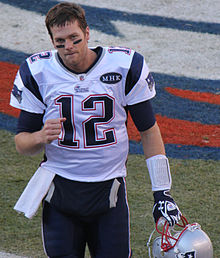 One reason that you can’t accept what you’re reading is because you’ve been forced to digest so much mythological propaganda concerning Jordan, that you can’t appreciate or accept the fact that maybe just maybe you’ve experienced someone just as great, with your own eyes. The deification of MJ, is so unfair to todays athletes. Well, I’m over it.

Jordan has built in advantages over Brady: sneaker deals, marketing hype, and the ability to be more recognizable (He didn’t have to wear a helmet, or play with 10 other people). But in terms of in-play greatness they’re neck and neck.