As a lifetime Washington Redskins fan of 24 years, I’ve seen the good, the bad, and the ugly. I was born in 1991, and when my newborn eyes saw the Burgundy & Gold hoist the Lombardi trophy that year I knew that this was my team. I remember 1999, when Brad Johnson led us to a division title and a convincing wild-card win over the Detroit Lions. Then we suffered a devastating defeat to Tampa Bay in the next round. That heartbreaking loss shaped how the 2000s would play out.As a Skins’ fan I’ve become used to mediocrity, heartache, and false hope. I have seen “big-time” free agents such as Albert Haynesworth come in and do absolutely nothing. I’ve seen big name coaches come in, give us a good first year, just to screw up the second year. I’ve even seen us become so desperate that we called Joe Gibbs out of retirement to coach. The worst part has always been our instability at quarterback. That position has never been a position of hope; it’s never inspired us to believe in our team. It was staffed by the likes of Jeff George, Patrick Ramsey, Jason Campbell, and John Beck.

Then 2012 happened. Coming off a terrible 5-11 season, the Redskins needed a huge shakeup in the organization and, going into the 2012 draft, there were rumors that Washington was going to make a splash. One headliner for the draft was Andrew Luck, while the other was a young QB from Baylor who came out of nowhere and shocked the college world. Heisman Trophy winner Robert Griffin III was one of the hottest players coming into the draft and the Redskins had their eyes set on landing him. They put all their eggs in the basket and, in the process, brought a new found hope to the city. 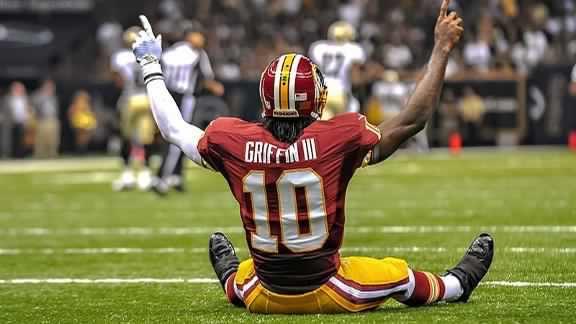 Dear RG3,
​I want to thank you for memories.

​Thank you for bringing hope to the city.

​Thank you for making a young guy like me believe in my team again.

​Thank you for overcoming adversity after a 3-6 start.

​Thank you for winning 7 straight when the doubters said we couldn’t.

Thank you for taking a 5-11 team from worst to first.

Thank you for bringing home the division title to a city that needed a fire.

Thank you for an epic rookie year.

Thank you for coming back from a devastating injury.

Thank you for staying humble in the midst of media chaos.

Thank you for keeping God first.

Thank you for staying professional when we treated you like an ugly stepchild.

Thank you for always staying true to yourself.

Thanks again for the memories.

Thank you for being RG3.

Now that you are no longer apart of the Redskins organization I pray that you find a team that will properly utilize your talents. I hope that the next team that you are on treats you with respect. I hope that sitting on the bench for a year, participating in scout team offense, and revisiting the past has helped you think more seriously about all facets of your game. I hope that you continue to perfect your craft so that one day you can come back to FedEx Field and remind the organization and its fans why we drafted you 2nd overall in 2012. Remind them of the hope that I felt in my heart when Roger Goodell called your name. Thanks again for the memories; I will always be a fan wherever you are.